How to Build a Pantry and Save Bundle! 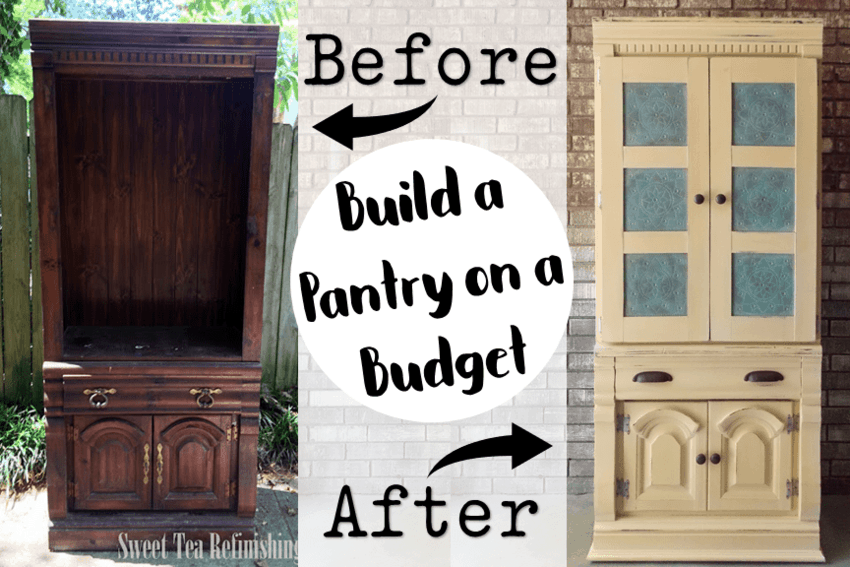 How can you build a pantry on a budget? I love that my clients challenge me!  I had not idea how to go about building a cabinet on a budget, until my client Mrs G decided she needed one!  It all began when Mrs G contacted me about embarking on a rather large remodel.  With a big open space she wanted to make a cohesive cabinet that also had some character,… she had a situation on her hands.
Her beautiful kitchen had just been stocked up with gorgeous custom cabinetry.. save one space near the back door.  As time went on she realized she desperately needed to make use of it! Preferably, an enclosed cabinet that would house a microwave.  The cabinet company came back with a quote of upwards of $1000,.. for matching floor to ceiling cabinets no more than 33″ wide.   She decided she wanted something more. She wanted something with character. Something that looked like it had a story.  As we began the hunt I came to realize this was going to be difficult! Fitting these dimensions would prove to be all but impossible.  I may have begun trying to coerce her to go with a lower storage piece and floating shelves or the like above… Nope.  She needed a pantry! …Then one day she messaged me.  She had come across the perfect piece! …well almost perfect.
The seller no longer had the upper doors,.. we would have to build our own, and she had fallen for the look of a pie safe, so we would have to factor that in.  BUT its got GREAT BONES! (We’ve all heard that before…) I may have been scared.  Just a little. Later she would confess she was just waiting for the phone call where I would say,.. “I just cant make it work..”  There may have been a few times,.
One time would have been while addressing the bottom.  Once the cabinet was in my dry garage, the particle board under the veneer would begin to crumble,.. after it had already severely swollen.  What had I gotten myself into?? I decided I would add trim.  After smoothing everything the best I could and leveling out the swelled areas, I attached molding and filled the areas that needed filling.  (I believe this is one of the points she had decided- she would get the call soon..) Onward and upward…sideways. Ha.
As I began to prep more I realized the same thing had begun to happen to the back of the sides as well… Once again-I would press on and begin to clean up and reinforce the area.
Finally I could breathe.  A little.  Now it was time to address creating the doors.  After all we had conquered with the rest of this piece-the doors proved to be a breeze!  After getting the back side stained and the holes pre-drilled for the hinges, I began to lay out the trim.  These would be attached in an effort to bring an authentic look to the pie tin she had already ordered.
After piecing everything together I was finally able to PAINT AND CREATE!

My soul was happy. Time to create the look! I would use a deep yellow mineral paint and use a white wash!

The light wood doors were stained with one coat of CeCe Caldwells “Hickory” Stain + Finish then coated again in CeCe’s “Kukui” Stain + Finish. This would only be the second time I have used this product and once again I was THRILLED with the results!!
Next the hardware had to be decided, and wow.  I had purchased these cup pulls months ago-with no clue as to how I would use them! But I LOVED them!! Once I pulled them out, my client agreed.  If you remember though, this cabinet came with very different hardware so we would have to somehow match it and give it a cohesive look.  D Lawless would prove to pull through once again!! I found the perfect knobs to compliment the piece and truly pull the entire look together.  Hallelujah.  I didnt even lose steam.  By the time I “needed” the hardware, it arrived! They are so awesome!
Hand distressing would come to the edges and where natural distress would occur over time..
Blends of Turquoise and metallic creams I had on hand would all come together to add to the look of the pie tin.
Who knew we would end up here?? I am so excited to see how it looks in her kitchen! I will be sure to update you as well, so be sure to check back!
As always, thanks for checking out That Sweet Tea Life!
Sharing is Caring!
Remember to Pin for later!!
Key West, General Finishes, and Chalk Style Paint?!
← Previous
An Old Fashioned Transformation
Next →
Click here to cancel reply.

What a neat idea! And it turned out so pretty! Good job girlfriend!

This definitely inspires me to over haul my own!

Thank you! I have seen some of the unofficial pictures and YES!

This is such a gorgeous piece of furniture! I really need a kitchen overhaul. Hers looks great.

Oh My Goodness! Beautiful job!! It's going to be perfect in her kitchen.

My name is Ryan and I’ve been a professional painter for the last 20 years. That Sweet Tea Life is a place where I get to slow down and visit the craftier side of painting. I’ll share with you everything I’ve learned painting hundreds of pieces of furniture and sets of kitchen cabinets. Even more, I’m hoping to learn from you and become an even better finisher.