ALL you need to know about White Wax! …and which one is right for you!

**This is a sponsored post-HOWEVER-as my sponsor knows, its 100% my very own, unpaid for opinion**
Ok so, I”m pretty sure Im late to the show but I just found out…
I LOVE WHITE WAX! 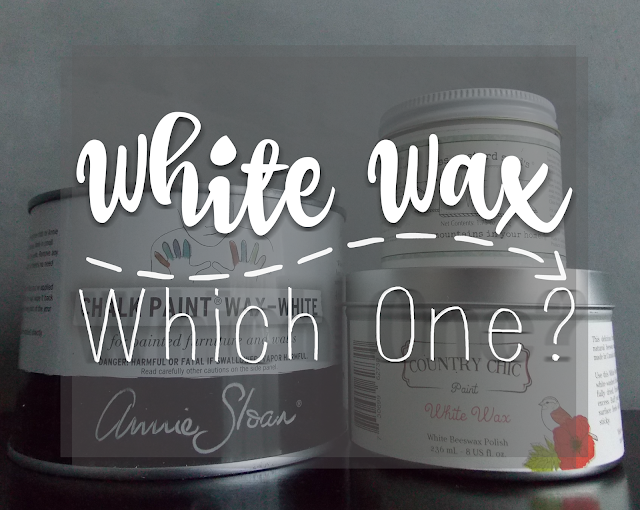 Just about as fast as I found that out, I also found out that the White Wax I had- did NOT love me!
My burning chest and angry sinuses would attest to that.  As the migraine set in I
grabbed the can I was working with which I naively thought
was a natural product.
Nope. Solvents.
Generally these solvents are put in there to quicken drying time and make easier work, and add durability,… but I love my work! I want to do it for years to come… Which means I have to take care of myself.  Here’s the thing though,.. doesn’t going green mean more expense as well as less quality??
Time for the Test
Taking 3 salvaged table legs, I painted them with a chalk/clay based paint.  Each of the waxes I chose were meant to be used with porous/textured paint.  So I wanted to be sure to use just that.  Also, for the record, the paint I used is not the same brand as any of these waxes.
I decided to use Miss Mustard Seed White Wax, as this is the one I already had on hand.  Additionally I would try out Annie Sloan’s Chalk Paint Wax-White that I was able to borrow from a friend.  Then, I wanted to see, can I really find a natural white wax.  It WAS NOT as easy as I thought it would be!  Then I remembered Country Chic Paint,.. You may remember I had the pleasure of working with them some time back with The Fab Furniture Flippin Contest. You can see that HERE.   After talking to them I would find out YES they do have a White Wax and YES ITS ALL NATURAL.  At this point I have to admit being a tad skeptical,… they were however, kind enough to send me some to try.
Using a different brush for each of the waxes, I brushed on each of the waxes onto each of the legs.  Then using a different rag for each leg, I wiped away the excess,.. 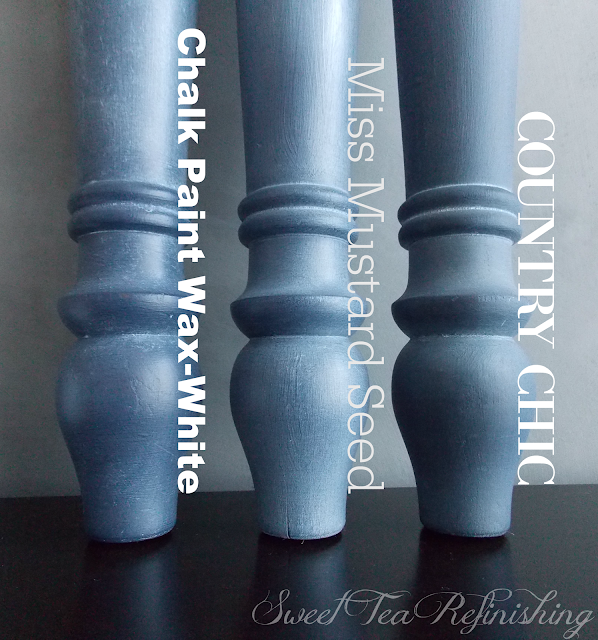 Some of the things I looked for are the scent, the coverage, the sheen, and the simple facts.
Chalk Paint™ Wax-White
Scent- Similar to Original Clear Wax, not horribly strong but definitely present.
Coverage- It went on smoothly, and fairly opaque but not consistent
Sheen- a little less sheen than I anticipated. Some gloss to it but not high.
Facts: I know there are solvents and the front of the can even warns you!   To be honest, I thought I was going to have a hard time with this one,  I assumed I would love it and hate making myself steer clear due to the chemicals.  But I wasn’t impressed.
Miss Mustard Seed
Scent- Not offensive at all! Smells very natural.
Coverage- Very smooth and opaque.  Incredibly Even. After buffing there is a very consistent look over the entire area. save the high points where it tends to leave only the sheen, and no white pigment.
Sheen- Fairly Glossy with buffing.  Truly as you apply with the brush, it tends to buff as you work it.  Facts: I know there are solvents in there,.. I know that my body seems to hate them.  So unless I want to go outdoors and/or use my respirator,.. I need to steer clear…
Country Chic
Scent- Scent: Since it contains tree nut oils, it has a slight, yet pleasant nutty smell.
It doesn’t have a potent chemical scent, though.
Coverage-Whoa. I was surprised at how far it went.  The wax itself is slightly hard comparatively so I was a little skeptical of how hard I was about to work.  But a little went a really long way!  It was also very consistent and smooth going on.  When I wiped away/buffed, there was a notable contrast in the areas I was able to reach and the crevices. So where as the MMS showed less contrast over everything, the Country Chic showed pronounced contrast.
Sheen- quite matte.  I do wonder if I had allowed to sit for longer if the sheen would have been different, however I like the more flat look so its fine for me.
Facts: Solvent and Chemical Free.
So whats my take away…?
My go to is absolutely the Country Chic White Wax. I absolutely LOVED the way it worked.  I didn’t think the coverage was going to be as opaque as it was.. and I see that its incredibly easy to use an artist brush to work in even more wax if i want to deepen an area.  I can use it anywhere,.. I don’t have to use a respirator.  And,. for me-that’s rather necessary.  There is no telling when I want to work on something and don’t like to feel restrained.  The Miss Mustard Seed wax “Stuck” to the paint surface… This meant there wasn’t much contrast unless maybe I want to work harder to wipe away? Or maybe with mineral spirits? but again,.. more and more chemicals and solvents.  I think I would rather add more wax for a deeper look than fight taking it away. 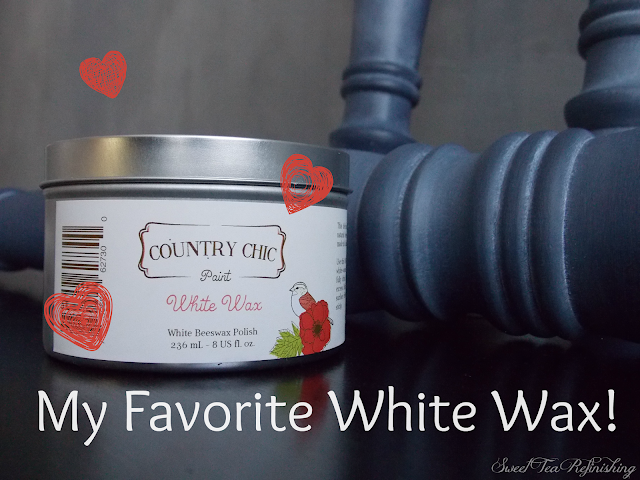 I AM REALLY HAPPY AND EXCITED THAT I FOUND THE RIGHT WHITE WAX FOR ME!

To celebrate,.. Lets have a GIVEAWAY!!!! Stay Tuned I will be posting a giveaway soon so you can experience some of this amazing awesomeness!!!
(You may even want to subscribe so you don’t miss it!)
You will have the opportunity to receive this FABULOUS Starter Package from Country Chic Paint! 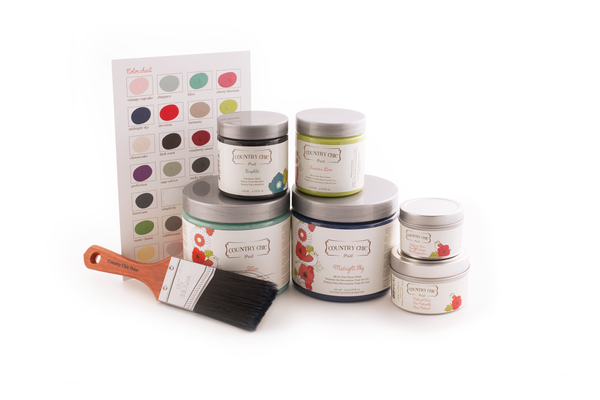 Country Chic Paint Starter Package Giveaway(Coming soon)!
So stay tuned!! Im excited to share the love with all of you!! This is just another reason I really enjoy working with Country Chics Products! Subscribe above for a chance to win!!
Sorry guys! That Giveaway has ended! But join us at Drink Paint Love Repeat for the latest Giveaways!
Thanks for tuning into see see whats new at +That Sweet Tea Life! Happy Painting Y’all!

Be that as it may, it still stands its not safe enough for me to use indoors. :-)

Just an FYI- the solvent in the Miss Mustard Seed's Wax is VERY safe, in fact it is a Mineral Oil- which is NOT a harsh solvent.

Thats how I felt too!

My pleasure! Hope it was helpful! <3

Thanks so much for this Thea. Finding the time to test all the different waxes and finishes isn't easy. So glad you did it for me

My name is Ryan and I’ve been a professional painter for the last 20 years. That Sweet Tea Life is a place where I get to slow down and visit the craftier side of painting. I’ll share with you everything I’ve learned painting hundreds of pieces of furniture and sets of kitchen cabinets. Even more, I’m hoping to learn from you and become an even better finisher.